The capital of the Republic of Tatarstan
The population of Kazan is 1.2 million people
The representatives of more than 115 ethnicities live in the capital of Tatarstan. The two largest groups are the Russians (48.6%) and the Tatars (47.6%)
In 2005, Kazan celebrated the 1000th anniversary of its foundation
Kazan is one of major industrial, financial, trade and tourist centres of Russia. It is located in the European part of Russia, 820 km to the east of Moscow
KAZAN
Kazan is a city of contrasts
Kazan is a city of contrasts, a notable example of peaceful coexistence, in an atmosphere of friendliness and tolerance, and with people of different ethnicities and confessions. 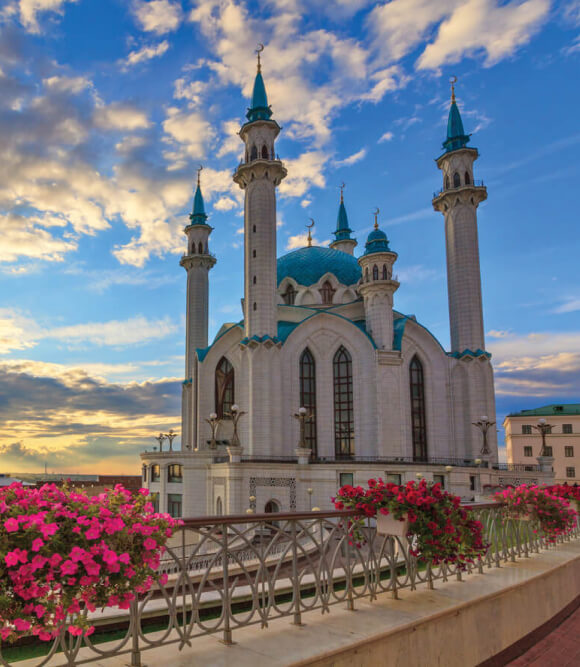 The uniqueness of Tatarstan's cultural heritage sites is acknowledged by inscription of the Historic and Architectural Complex of the Kazan Kremlin onto the UNESCO World Heritage List.
Today Kazan is one of the most visited cities in Russia by tourists. Kazan's capabilities in the field of hospitality organization allow staging major international events at the highest level.
Large international festivals are held in Kazan every year: Fedor Shalyapin International Opera Festival, Rudolf Nureev International Festival of Classical Ballet, International Sergei Rachmaninoff White Lilac Music Festival, Kazan International Festival of Muslim Cinema and "Aksyonov-fest" Literature Festival.
Kazan has been one of the leading scientific centres in Eastern Europe for over 200 years. World famous schools of mathematicians, chemists, astronomers, physicists, orientalists, linguists and physiologists were established here. In Kazan, there are the Tatarstan Academy of Sciences and the Kazan Scientific Centre of the Russian Academy of Sciences, the largest universities in Russia.
Kazan is one of the most modern and youthful cities in Russia. There are more than 44 institutions of higher education with over 200,000 students from 67 countries. Kazan is the only city in Russia with a federal university and two national research universities.
Cultural Kazan
Scientific Kazan
Youthful Kazan

Dinamo-Kazan (field hockey)
Dinamo-Kazan (bandy)
Tatarstan is economically developed region
Tatarstan is one of the most economically developed regions of Russia. The republic is located in the centre of a large industrial region of the Russian Federation, at the intersection of the most important routes connecting the east and the west, the north and the south of the country.
The most developed industries are oil production, chemistry and petrochemistry, mechanical engineering and metalworking, construction, power engineering and light industry. One of the priority areas for the Republic of Tatarstan is IT and nanotechnology. Science and education are an intellectual aid to the industry of Tatarstan.
The social and economic strategy of the Republic of Tatarstan is aimed at improving quality of life in the community and assurance of steady innovative development of the region's economy. Thanks largely to this strategy and consistent approach, Tatarstan is currently one of the leading regions of Russia.
Hospitable Tatarstan
The Republic of Tatarstan has a huge tourism potential: a variety of natural areas, rich historical and cultural heritage. Of the 27 sites on the territory of Russia inscribed in the UNESCO World Heritage List, three are located in the territory of the Republic of Tatarstan: the city of Bolgar – a monument of the 10th-15th centuries, the ancient capital of the Volga Bulgaria state that existed in the 8th-13th centuries; Assumption Cathedral and monastery on the town-island of Sviyazhsk as well as the Kazan Kremlin Complex.
The fates of many renowned cultural figures have been intertwined in Tatarstan as well: singer Fedor Shalyapin, writers Leo Tolstoy, Sergey Aksakov, Maksim Gorky, Vasily Aksyonov, poets Yevgeny Baratynsky, Gavrila Derzhavin, Marina Tsvetaeva and Nikolay Zabolotsky, artists Ivan Shishkin and Nicolai Fechin.
The pride of the Tatar culture also includes classic Tatar poet Gabdulla Tukai, poet and hero Musa Dzhalil, composers Farid Yarullin, Salikh Saidashev, Nazib Zhiganov, Sofia Gubaidulina and many others.
The Republic of Tatarstan is also one of the sports leaders among the regions of the Russian Federation. The widespread creation of conditions for sports, the construction of sports facilities in Tatarstan became the basis for the formation of a healthy lifestyle among the population. Almost all regions of the republic have modern sports complexes for practicing various sports.
Tatarstan – the sports region
Republic of Tatarstan
Tatarstan is one of the most economically developed regions of Russia
The republic is home to 3.89 million people
Tatarstan has been historically and geographically located at the junction point of two major civilisations: eastern and western, which goes a long way towards explaining its diversity. Tatarstan is one of the most multinational territories of Russia. The republic is home to 3.89 million people, representing over 173 nationalities.
There are two official languages: Tatar and Russian
The Tatar language belongs to the Turkic language family. The traditional religions of the Republic are Islam and Christianity. Catholicism, Protestantism, Judaism, and other religions are also practiced here.
Tatarstan
Russian Federation
Russia is situated in Eastern Europe and North Asia borders on the Pacific Ocean and the Arctic Ocean. The deepest and cleanest lake on our planet – Lake Baikal, as well as the longest river in Europe – the Volga River – are located here. The country has 11 time zones.
The country has the largest reserves of mineral and energy resources in the world and is considered one of the world's leading energy producers.
The country is a member of various major international organisations – permanent member of the UN Security Council, member of G20, Council of Europe (CE), Asia-Pacific Economic Cooperation (APEC), Shanghai Cooperation Organisation (SCO), Eurasian Economic Union (EEU) and Commonwealth of Independent States (CIS).
Russia is diverse and open to everyone. Russia has much to be proud of – it is a unique country with a deep history and a progressive future. The people of Russia are sincere, open in soul and heart, hospitable by nature. Different ethnicities coexist peacefully in our country, and all of them are united by love for their country and sport.
The capital of the Russian Federation is Moscow, with more than 10 million people residing here
The total population is more than 146 million people
The total population is representing more than 160 ethnic groups and indigenous peoples. The Russian Federation is the world's largest country with a centuries-old history, rich cultural heritage, and generous nature.
The state language of Russia is Russian
In Russia, more than a hundred languages are spoken and a variety of religions, customs and traditions are professed. The official language of the country is Russian, which belongs to the family of Indo-European languages, and is also one of the six official languages of the United Nations.
RUSSIA
Russian Federation